Isn’t that a most interesting thought?

The idea that we are not our thoughts, but instead we have them is not new to me.

I think the first time that I became slightly aware of that was when I read the book ‘ You can heal your life’ from Louise Hay, about 8 years ago now. My mind was always busy and the idea that I could choose my own thought was revolutionary to me! It openen up a whole new way of thinking, of living. I had some ‘control’, something to say about where I would go with my mind.

Since that time I read a lot of books, watched a lot of teachings and video’s, participated i n courses and meditated and contemplated about it.

The mysterious life of thinking and thoughts still fascinates me. 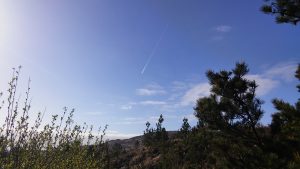 Sometime in the last months, during one of the retreats with a Tibetan Buddhist teachers (*) here at Dzogchen Beara this sentence came up:

“Where does a thought go when you stop thinking about it?”

A sentence, a thought that comes back to me sometimes. Because after all this years, this image suddenly made it so clear for me: a thought is just a shapeless ‘thing’. And as long as we give it attention, energy, it stays around. The minute, even the second, we stop thinking the thought: it is gone.

So we are in control about which thoughts we keep around. And which ones we let go.

Of course, that is easier said than done. Like other human beings I can stick to a thought, a happy one, a sad one, it doesn’t matter. I choose (most of the time subconsciously) to keep the thought around. Repeat it in my head. Sometimes exactly the same. More often in various words and shapes.

But if I let the thought go…. it is really gone. It disappeared. It is no longer there. Like it was never there in the first place.

Isn’t that the most fascinating thought?

(*)
(I can’t remember which teacher by the way… I think it might be Jetsun Khandro Rinpoche).