Always, but especially in times of change and uncertainty, it can be helpful to go within.

To take a step back from the world. To even take a step back from what you think you know and believe and feel. And be aware of what’s happening inside yourself. Beyond the surface. With as much kindness as possible. No matter if you like what you notice, or not. Try not to judge. Even try not to judge if you’re noticing that you are judging. Just notice and observe. Be aware.

That can be unsettling and scary, at first.

So if you start (again) to make some time to just be, you have to adjust to that. At first your thoughts might roam wildly. Or your body gets very restless. Those are actually signs that you don’t have enough just-be-time.

I do believe that it is crucial for us human beings to take some time to go within. It is not a luxury. It is not selfish. Quite the opposite. It helps you to see things more clearly, to feel more grounded, to make room for more kindness. It helps accepting that life is always changing and includes everything: the good, the bad and the ugly. So go within. Even if it’s just for a few minutes a day.

Take a few deep breaths. Meditate. Stare out of the window. Write down some thoughts. Read a bit in a book that feels good. Listen to a nice song with your eyes closed. Make a drawing. Go for a little walk.

“The path to unshakable well-being lies in being completely present and open to all sights, all sounds, all thoughts – never withdrawing, never hiding, never needing to jazz them up or tone them down.” 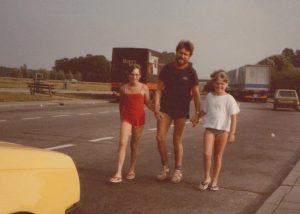 Everyone you meet has their own battles, joys, doubts, pleasures, worries, questions, insecurities and achievements.

No one on earth is here to do you wrong.

You are the one that can think so.

What do other people trigger in you, ‘good’ or ‘bad’?

What lesson may their being, their presence, their long or very short stay in your life tea8ch you, if you allow it?

If you think you have all the answers, you are not open to learn more.

Other people and situations are like mirrors: they are as they are. You are the one that gives it meaning, a background, a story.

Stay open to learn, appreciate everyone you meet.

Because you never know who or what will give you a valuable lesson or insight to keep growing as a human.

“Imagine that everyone is enlightened except you. The people you meet are all here to teach you something.”
Richard Carlson-  Don’t sweat the small stuff.