Not because I never watched, but because I couldn’t stop watching once it was one. When I was a kid I loved music clips and series. I have to say that my knowledge of the English language improved by that. And there was much less broadcasting when I was younger, so yes, I also had plenty of time to play outside with friends and read a lot.

Later in life I still liked to watch. And I always got sucked into other storylines as well, while zapping in the commercial breaks.  I didn’t have enough self-control not to watch. At a certain point I decided to get myself a monthly subscription to a package with loads of tv-channels and the possibility to record programmes.

A few days later I got the news that I was picked to live at my own room within a communal house. I was going to live on the second floor on a building with high rooms, so there were lots of stairs. I decided then and there not to drag anything up that stairs that I wouldn’t consider as useful.

And I made the choice to get rid of my television. And you know what: I never missed it.

There were some times that I really wanted to watch things on a screen and then there were websites where I could watch tv series and programmes. Or I would watch a dvd. I never wanted to learn how to download movies or series, because I know ther was a big change that I would watch way more than I would actually like.

In the last years I occasionally stayed in houses of friends for a few days, to mind their house and cats and or plants, and if they would have a tv, I would eagerly go for it. After a while I always got bored, annoyed or overwhelmed by it.

A few weeks ago I was in the Netherlands for a week or two. Because I quit my rent before I went on my lettin go adventure  I stayed with several friends. The last week I stayed at the house of friends who were going on holiday.

And I discovered that I still was drawn to watching tv more than I think I would like. A part of me was ok by that, also because this was after all my holiday in between working as a volunteer with less private space for months on a row. A part of me was not ok by that, because I also could spend more time on meditating, reading and writing.

So I watched 22 episodes of a serie, the history of hiphop (I thought it was only 45 minutes instead of 4 episodes of 45 minutes… Of course I had to watch them all), a great documentary about background singers and a cheesy and nice comedy about love.

It was all quit informative, entertaining and interesting, but I also realised why I don’t want to watch that much: it all takes space up in my head and it sips into my dreams, so I’m partly processing other people’s stories instead of my own. And it also messes with my sleep: I went to bed later than I would feel like kt, because the thing I was watching wasn’t finished yet.

Since a few days I am at my new voluntary project in Ireland. With no television. So more time for other things, like enjoying the view, reading a book or writing this blog. 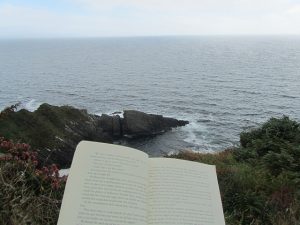