Sometimes people or animals come in your life and you feel a special connection with them. It can be beings that are in your life for years, for one brief encounter or something in between that.

For the last few months i felt a special connection with a cat. A very special cat. His name was Mucky. I am sorry to say that he died last weekend. I am happy to say that it was a very peaceful end.

The second day as a volunteer at Dzogchen Beara i  sat outside and he crawled into my lap. Later i held him in my arms. He seemed to like that as much as i did. He hold me tight. After a while he placed his arms so that each one of them was on was on one side of my neck. A cat hug. He stole my heart at that very moment. 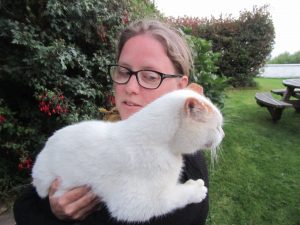 He was one of the three cats that were here for about 10 years. Some periodes they lived in the hostel, now they were outside cats. They lingered around the hostel, waiting to sneak in. Or find a nice human lap outside to sit on.

Mucky had a heart failure. Because of that his body made more fluids. He got his medicine together with some food outside the hostel for a few months. He lingered outside, even when it was raining heavily he sat on the outside window still, looking inside, to the humans.

He was a special one in many ways. He had an interesting appearance. He lived at a Buddhist retreat centre and probably picked up some extra wisdom here and there, many people thought.

Two months ago i noticed a few things in his behaviour that seemed odd. The vet discovered that he was dehydrated and had an ammonia. He stayed there for two days and when he was back he had to sleep in the hostel porch, to recover. With more medicine. Since i was quit attached to him and very punctual, i was in charge of feeding him his food, medicine and water.

I was very happy that he could life inside now. He got a bit more strenght in a few days, but the porch became his new home. When the weather was good, he would go outside. Sometimes to wander for hours, sometimes to lie down in the hostel garden. 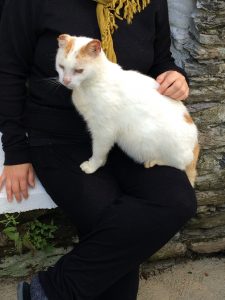 I loved to take care of him, and experienced it as quit intense, the responsibility. And i always felt sorry for him when he was inside, one door away of more warmth and people. So a few times a day I sat on the ground of the porch, with him on my lap or in my arms. Luckily the other volunteers did spend some time there with him too. The beginning of october a new volunteer came and she felt like taking care of him too. It was nice to share the care and responsibility.

He lived here for more then 10 years and in the last weeks we heard some funny and interesting stories about him. It seemed that he stole the hearts of many people. I only knew him as a slow and calm cat, but less than a year before he was still very alive, strawling around and being a bit clumsy and messy.

An evening almost two weeks ago we thought his last moment was there. His breathing became very heavy. It was really sad, also because there was nothing we could do about it. It became better later that evening, but we realised that the fluid in his belly really became too much for his lungs. just as the vet told us a few weeks ago.

In the week that followed a few people came by to say goodbye to Mucky. Me and the other volunteer monitored him closely, making sure he got his medicine, that he was warm enough and that he drank enough water. And sit with him and petted him as much as he let us. It was very special to be so close to this special cat in his final stage of his life. I’m not sure how to explain this properly: it felt as an honour that he let me take care of him. And I will never forget the powerful and loving look he had when he directly looked me in the eyes.

Last saturday during the day he came closer to the two of us than the days before. Early in the night my fellow volunteer woke me up. I went down and she told me Mucky just died. He went outside and when she called him back to close the door, he didn’t come as usual. She found him in the garden. He just walked outside, lied down and died. Quit a peaceful ending.

No matter how many words I write, it doesn’t seem enough. I suppose that’s how it is when you feel a special connection with a living being. I’m glad we shared a little bit of our lives together! 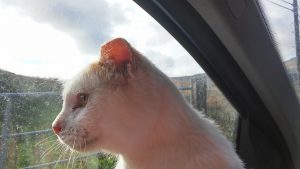